Moekotte was commissioned by Hosokawa Micron to develop a system for tracking & tracing that could be implemented in the control systems for vacuum dryers, mixers and filling units. Within each project, the specifications drawn up by the customer were used to determine which parameters were so-called GAMP-critical parameters. These had to be set down and were assigned an electronic signature with an operator name and password. All of the aspects within the V-model were controlled and implemented by Moekotte, from the functional specification up to and including the operational qualification.

A manufacturer needs to be able to demonstrate which ingredients have been incorporated into a certain batch of product and in what quantities, who the supplier of those ingredients is, but also who is responsible for the realisation of a quantity of end product at what time and subject to which conditions. Corresponding process data must be stored in secure, irremovable files. Manual adjustments may only be made by authorised personnel and are recorded in the aforementioned files, along with the time at which the change was made and the name of the operator who made the adjustment.

As a result of the fact that Moekotte has had experience with similar types of projects and is familiar with terms such as GAMP, 21CFRP11, ANSI/ISA88 (S88) and ATEX, this led to high-quality end result. The tracking & tracing control system developed by Moekotte has now been implemented at Océ (Venlo), AKZO Diosynth (Oss), Solvay (France), Bracco (Italy), Sanofi (France), Vitatene (Spain), Pfizer (Ireland) and Astra (Sweden and Russia). 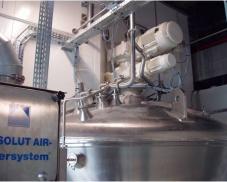